I do like art (heck, I married an artist and represent them for a living), but I’ll admit I’m not an avid collector or someone who can even offer an intelligent reason why some works are considered museum worthy and others just wind up on the sidewalk. But, what I can tell you is that art is an emotional experience. You have to reason that every artist has the goal to make you feel something, whether positive or negative. When a friend told me that I had to check out the Alexander McQueen exhibit at the Met, I had no idea that it would change my view of fashion, art and the blurred lines between fantasy and reality.

Alexander McQueen was known for many things in the fashion industry—among them, being unapologetic for his passion. I had not studied his collections nor had I read a single word about his life, but from the moment I stepped into the first room of “his house,” I was transported…sad, even, that I had not appreciated this young, brilliant talent before he took his own life.

As I moved from room to room, I started to realize that his inspiration wasn’t just some “out there” attempt at getting attention, but rather a much deeper, mad genius take on historical events, nature and above all, finding the beautiful in the ugly.  At one point, the score from Schindler’s List began against a video installation and the air became haunted and melancholy. Sure, his costumes were breathtaking, but bravo to the Met for a brilliant job of setting the perfect mood. Now, if only I could afford that Sarabande dress from spring/summer 2007 decked out in silk and fresh flowers… 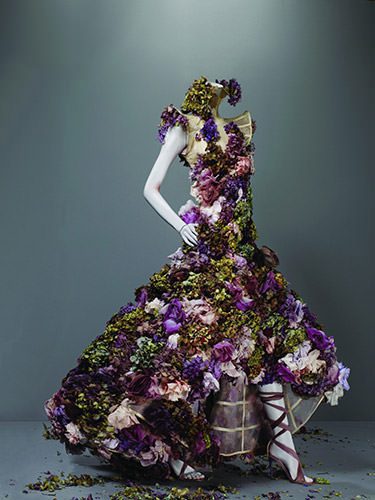 ‘There is no way back for me now. I am going to take you on journeys you’ve never dreamed were possible.’ -Alexander McQueen

NOTE: Alexander McQueen, Savage Beauty is now showing at the Metropolitan Museum of Art in New York City and was recently extended through August 7, 2011. If you can’t make the exhibit, you can still purchase the book.

TIP—if you go on a weekend, prepare to stand in line for tickets. You can avoid lines by becoming a member, which only cost $20 more than 2 tickets. Support the arts, avoid the lines-nuff said.