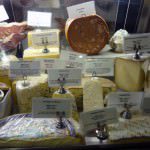 When I used to think American cheese, I thought Velveeta and Kraft. I’m not sure I’ve ever ordered American cheese, except for when topping a burger or deli sandwich. And never with wine…But not anymore.  I recently attended the Charleston Food + Wine festival, and became a believer in the elegance of good ole American cheese. After spending a few hours sampling some of the finest American varieties, I discovered it’s no second class cheese.

I signed up for The Ultimate Cheese and Wine Pairing ($40 a ticket), taught by Mike Black, sous chef at Caviar & Bananas— a gourmet market and cafe in downtown Charleston. Since we were sipping American wines, he focused on pairing the wines with American cheese. A novel idea. Now, when I think of American cheese, I think Pierce Point and Lambchopper.  Mmmm …

Here’s a sample of my favorites:

Cowgirl Creamery Pierce Point: Move over brie. This cheese is creamier and naughtier.  From Point Reyes, California, this organic cheese is rolled in dried herbs, giving the sweetness of the cheese a nice contrast. Dessert-like, Pierce Point might lean itself more to the female palate and is complemented best by a light, white wine.

Cypress Grove Lamp Chopper: Hands-down, Lamb Chopper, made in Humboldt County, California, was the surprise crowd favorite. At first glance, I thought the hard-looking cheese would be sharp and strong, but instead, the sheep milk gouda’s buttery flavor melted in your mouth. This cheese was so good and so addicting that co-tasters immediately purchased some for later in the weekend. Many suggest pairing Pinot with this cheese, but champagne also adds nicely to the depth of flavor.

Dante: Contrary to popular belief, Wisconsin cheddar isn’t better. Take it from the Wisconsin Sheep Dairy Cooperative, a 12-member co-op, responsible for Dante. Made between February and September, Dante is a rich, full-flavored cheese with a lasting, almost sweet finish. You can serve it before dinner with olives and a nice, fruity red wine.

American cheese is back, so break out your American flag, sing the Star Spangled Banner and salute our nation’s fine cheeses.  It’s every bit as sophisticated as its European counterparts without all the ‘tude.

Not in Charleston? These selections can also be found at your local gourmet grocer or fine cheese shop.