Tuesday was our eighth wedding anniversary. Spago recently reopened after a two month revamp, so we decided to celebrate with Wolfgang Puck. I’ve always said that Spago is the most underrated restaurant in LA. Why? Because I think for service, ambiance  and consistency, it’s hard to beat. Some of my best meals have been at Spago. Which brings me to the cheesy mashed potatoes they used to serve in a cast iron dish. The waiter would take two spoons and fold it all together tableside as you watched the cheese oooh and gooo pulling from spoon to dish, while your mouth watered in wicked anticipation of it all. And Chef Puck was always there, dropping by your table to say hello. But that was then. 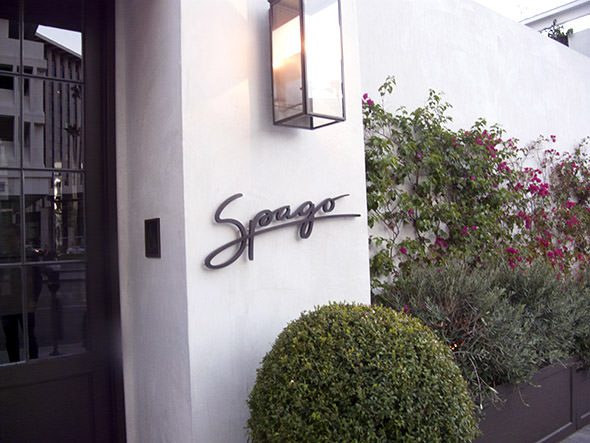 If you asked anyone their favorite restaurant in LA last year, it was sure not to be Spago. Everyone wants new and to score a reservation where it’s impossible to get a reservation. In LA, that makes you cool—oh, and winning Top Chef.  So, I’m guessing Spago felt they needed a coming out party to put themselves back on the map— to compete with the new and cool. 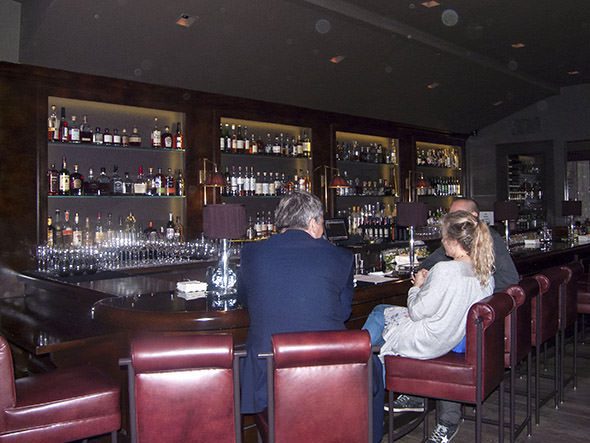 Now, they have a new look. It is still very civilized—like the gorgeous dark wood bar… 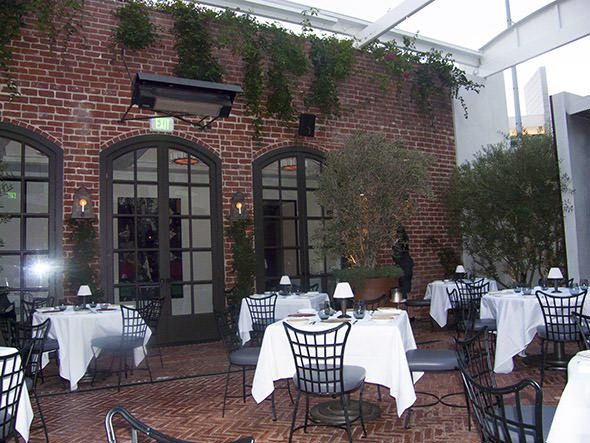 And the open air patio, which I highly recommend 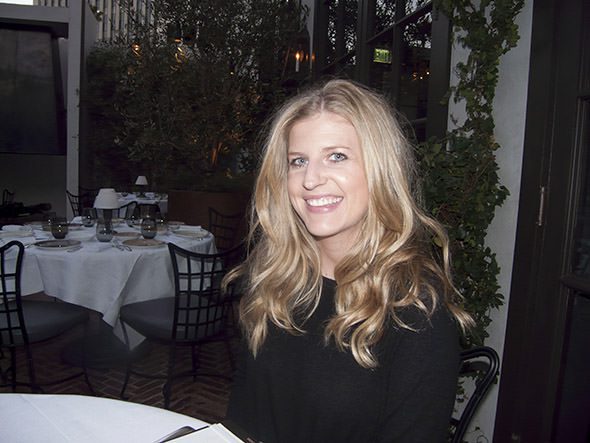 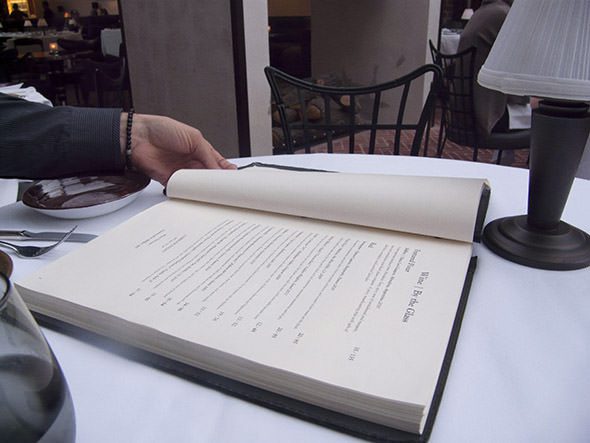 Upon sitting, you are presented with the massive wine book. Apparently, if they don’t have it, you shouldn’t drink it. 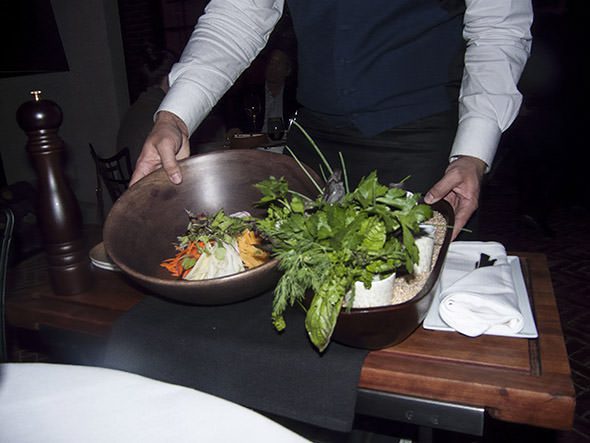 It’s only fair to state that we came here with expectations of doing their tasting menu. That used to be an option on the menu. I’ll even be so bold as to say that doing the tasting menu at Spago was on our bucket list. Unfortunately, their new menu does not give a tasting menu option. And though the chef can sometimes accommodate, because of a dairy restriction on Dave’s part, they needed 24 hours notice. Boo hoo. But, the waiter tried to console us by showing us that the new menu is smaller plates, so essentially we could mix and match to make our on tasting menu. Small plates huh? What a concept.

Rather than throw a tantrum, I decided to make the best of it. And so we started with the Chino Farms Vegetable salad prepared table side. 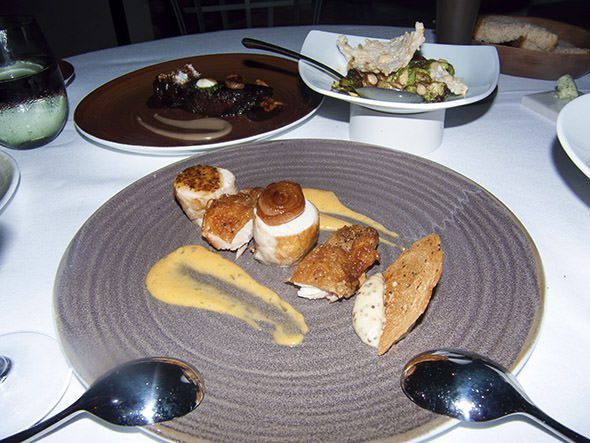 Our favorite dish of the night was the Jidori Chicken with a Celery Mustard Puree.

In the background are the Snake River Farm’s Wagyu Shortribs with grain mustard and horseradish, as well as the Roasted Brussel Sprouts with Shiro Miso-Maple Mustard. Everything was cooked perfectly and had great flavor, but the flavor tended to be the same flavor on every other menu in town. Brussel Sprouts again? It seems the new changes have sort of turned a Los Angeles institution into the same ole, same ole. Which is a shame, because I know Executive Chef Lee Hefter is talented. I met him a few years ago when he did a television segment with a client of mine. Afterwards, he brought out plate after plate of his off the menu creations and I was completely wowed and blown away. The experience was unlike any other. And that is the Spago that I will remember. 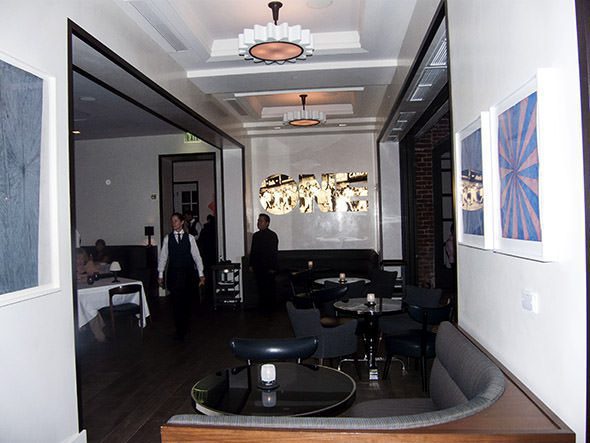 Though the modern art was a very cool touch, I hope they can find a balance where new meets classic, instead of just trying to do what everyone else is doing. 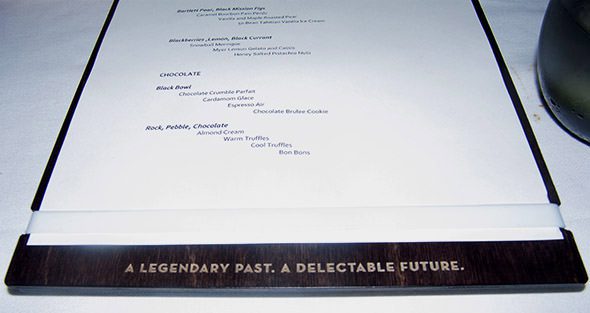 Expectations are everything. And I came hoping for one thing and got something else. But, Spago can still pride itself on excellence. Despite my preference to the old menu, the execution of the new one was pretty near flawless. Just because I’m sick of brussel sprouts doesn’t mean you are. Would love to know what you think of the new Spago.